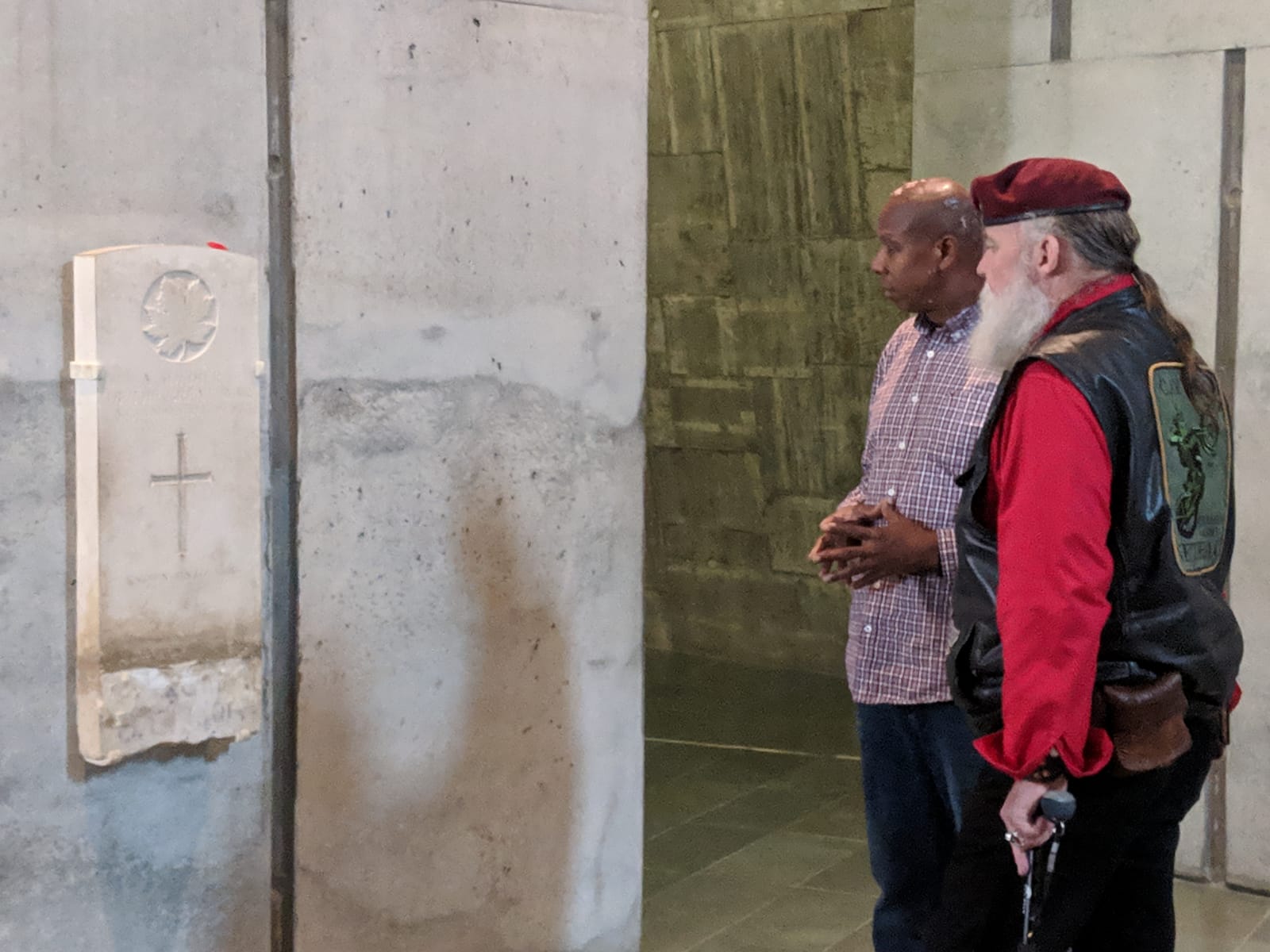 “While filming an upcoming episode of ‘Riding with Heroes’ for the Veterans Channel in our Nation’s Capital, it was my great honour to share a uniquely touching tribute Canadians have put in place at our National War Museum. ‘Memorial Hall’ and the ‘Royal Canadian Legion Hall of Honour’ locations hosted our cameras as we told the stories through upcoming episodes of not only ‘The Response’ maquette by artist Vernon March, the basis of our National War Memorial but the inspiring tale of a humble marble marker bearing a single Maple Leaf of Grave 7, Row E Plot 8 taken from Cabaret-Rouge Commonwealth War Cemetery in France, now the single object inside the War Museums Memorial Hall.

To be in this hallowed space at any time is a great honour.  This solemn day the visit with a unique American veteran Mr. Adrian B. Hamrick Tomb Guard #367, was special in many ways. It was this soldier’s duties to stand guard above the ‘Unknown’s’ of America. He as will anyone entering this chamber, feels instantly the gravity of the space. As veterans, irregardless of what uniform we wore, this place commands our very heartbeats to slow. The Memorial Hall is a quiet place for reflection, its grey concrete walls invoke the feeling of row on row of gravestones found in allied cemeteries world- wide.  A single bench to contemplate is mounted alongside an infinity pool that reflects this tribute that not only identifies but unites all of the fallen who have no known grave, as well as generations of those who’ve worn a uniform for others at the greatest cost. This battlefield soil stained grave marker now resting in Ottawa stood above the remains of an Unknown Soldier killed in the heavy fighting around Vimy Ridge. 66,000 died in WW1, with almost 20,000 who have no identifiable grave. Of the 117,000 Canadians who have died in all wars since Confederation, over 28,000 have no known grave.

This however, is not a static dusty artifact simply on display as it takes on life of its own as every November 11th, on that 11th day, at the 11th hour for eternity,  the sun itself completes a sacred duty. The Memorial Hall has a single window set high on the wall opposite the original tomb stone of our Unknown Soldier. On Remembrance Day, those who know what will happen gather in silence as the museum Itself was designed, placed strategically and built representative of Land, Sea and Air elements of military service, with an aperture that allows a single shaft of light to enter the Memorial Hall at exactly at the historic moment the guns fell silent and peace returned to the earth in 1918.  The grave stone is illuminated brilliantly by the day’s sun renewing that pledge ‘We Will Never Forget’ annually, eternally. The generation of this Unknown would be unfamiliar with today’s or tomorrow’s  tactics or equipment, but the common thread of never-ending sacrifice by the individual, would be understood by everyone who’ve served and offered up their todays, for other’s tomorrows.

This was the first time Adrian and I had met in person, but as we’d been in communications ahead of filming, I knew well the calibre of this old Soldier. As the Memorial Hall unites the familes of those with no known resting place giving them a place to mourn, a grave to visit, it also unites all generations, of all wars and types of sacrifice as no matter what uniform one must wear to serve others. Sacrifice of self being the ‘common’ heroism. The simple ongoing act of offering up your very life for those you love or those you will never know, ties together countless citizens who in paying the ultimate cost, understand that that any sacrifice offered will Never Be Forgotten. The stone in front of us marked a citizen who could literally be any mother’s son, from anywhere coast to coast from anyone of the many who volunteer. He could be Indigenous or from one of the many waves of immigration that followed in Canada till a national need brought them all together. ‘The Unknown’s’ remains rest now in Ottawa at the base of our National War Memorial in a sarcophagus fit for our Greatest Heroes, the marker that stood above him for 82 years still on duty as well.

As an old paratrooper meeting Adrian for the first time, it was fitting that it was the memorial Chamber that drew us together. All old soldiers including our ‘Unknown’ would understand the common emotions felt by civilians or veterans in this Hallowed Chamber. Emotions reaching across generations, reawakening for veterans through deeper memories. This American allie was already my brother, though serving in different armys on different missions we’d both shared the world of the ‘jumper’. No matter what service or trade anyone in the military tackles they train and deploy always at the top of thier game bringing their best to the job. As with our WW1 Soldier, committed to victory at any cost. As a paratrooper, its a world where the job you do once ‘on the ground’ was secondary to the safe execution of the initial drop into combat . During every moment from donning your equipment to exiting the aircraft (or being retrieved back into the aircraft or ‘cut away’ should you become ‘hung up’), all rank was put away as the ‘Jump Master’ in charge of your stick called your name on manifest and ‘owned you’ till you got out the door. You literally trusted your life to everyone around you and countless others you’d never know. This a fighting technique foreign of course to WW1 volunteers or tactics, but a dedication and discipline required that would be understood by any generation that has been forced to learn the ever evolving black arts of war.  Wether it was trusting our lives to the packer riggers who packed and jumped the same chutes, the Tech and Flight crews in aircraft rigged for para operations flying ‘Nap of the Earth’ at low level that carried a mass of equipment and dropped ‘Meat Bombs’ (we had headsets, we heard you!), every generation of those who volunteer forge lifelong bonds with those others beside them or worldwide, throughout history we who’ve faced a world totally foreign to our beginning and united conquered fear thanks to being part of a unique team.

Wether soldier, sailor or aircrew of today’s military there are many similarities generations of volunteers would recognize. Being a part of a unique team is the key element to any group tacking and conquering any obstacle. It was my great honour this day to stand beside Sgt Maj (ret) Hamrick and also 22 years of service veteran of the Sri Lankan Air Force retired Wing Commander Lalith Samarawickrama and Ken Proude veteran of the Canadian Forces and a great ‘fixer’ keeping our filming smooth. During my life I have shared time with 1st World War veterans and those who have fought in every conflict since. To be in Ottawa to share the day with Lalith, Ken, ably assisted by the hard working War Museum staff made the visit perfect. Everyone attending in awe while listening to the wisdom of each of these old soldiers. Crucially, sharing time with Adrian was historic.

The ‘Tomb of the Unknown Soldier Identification Badge’ is only issued to the chosen few, the “Sentinels” Honour Guard who place themselves between the living, and the Unkown Soldiers of America. Only the United States Astronaut Badge has fewer awardee’s. As of March 2020 only 678 Tomb Guard Badges have been issued.

As a Canadian, the honour and pleasure of introducing fellow warriors and our fantastic The Veterans Channel viewers, all of whom understand fully the heartfelt energy and actions required to Honour our world’s Unknown Soldier’s, is a memory captured by The Veterans Channel cameras and crews that I will Never Forget!!