Home Blogs We Will Remember Them, Eric Dahl Guardian of the Fallen 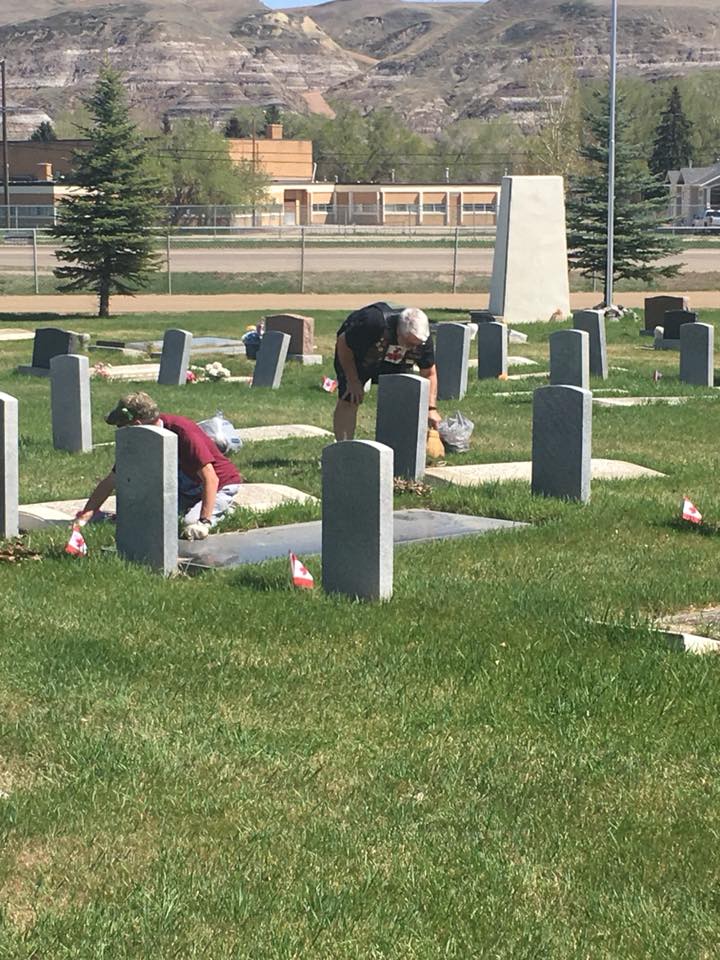 Everyday no matter what part of the world we travel in as you pass the graves of our military heroes, those who fell in service to our Nation or those who served and passed after giving a lifetime of service to others, these final resting places seem to ‘call out’ to us. ‘Listening’ are those of us who feel a lifelong debt to those who’ve secured our freedoms. Eric Dahl of Drumheller Alberta has made it his life’s mission as Founder and CEO of Memory Keepers to never forget these heroes, in the humblest way possible, by tending to their graves and by teaching others how to repay a great debt with this intimate heartfelt action.

‘We Will Remember Them’ are the simple ‘Ode to Remembrance’ words of the 4th stanza of Poet Laurence Binyon’s ‘For the Fallen’ , a poem published in September 1914, words written on a cliffside near Cornwall England overlooking the ocean, following the word spreading of the heavy losses suffered in retreat by British forces during the 1914 Battle of Mons.

“They shall grow not old, as we that are left grow old;
Age shall not weary them, nor the years condemn.
At the going down of the sun and in the morning
We will remember them.”

Mr Eric Dahl of Drumheller Alberta has taken on a sacred duty, as Guardian of the Fallen and the respectful ‘keeping’ of the final resting places of our heroes, too many often forgotten by family over the passage of time or even in the Community’s they touched.  Memory Keepers ensures this legacy is never forgotten. Beginning in Drumheller Eric cleaned every single veterans grave in the three local burial grounds, 300 souls who can longer speak for themselves, as the years moved on Memory Keepers and its many volunteers are now answering Mr Dahls challenge Nation wide. To quote him directly, ‘I truly believe that all of our Freedoms that we enjoy today are paid for by our forefathers and we need to Remember this all the time and not just on Remembrance Day’.

Eric, a father of five who’s present life mission began in his heart and in local cemeteries, teach’s like minded volunteers who take his mission to as many of our veterans resting places as possible. He comes by this passion honestly.

Always determined to donate his time and energy in acts of kindness, it wasn’t till after this journey began that he found out his grandfather Daniel Keenan Hume who’d never spoken of his war years, was actually an Air Force and Royal Canadian Navy Veteran who was seriously injured when his ship HMCS Regina was torpedoed August 1944 off the coast of Cornwall England by Nazi submarine U 677. Surviving but facing the loss of 40 fellow crewman, soon afterwards he was imprisoned at Stalag Camp 5-A outside of Ludwigsburg Germany as a Prisoner of War. Without realizing that his ongoing service followed a family tradition, Eric Dahl now makes available to anyone driven as is he, to honour our fallen with the knowledge and techniques that not only preserve the final resting places, but rejuvenate and showcase each Hero’s memorial.

In the photos attached we see a fraction of the positive energy his life mission has created. For years now Ive had our membership of the Canadian Army Veterans Motorcycles Units western Canadian ‘3rd CAV’ reporting of his initiative to our National Hq. Our Frezenberg Unit out of Edmonton, Mount Sorrel Unit from Red Deer and Ypres Unit riding out of Calgary are always engaged in community and Veteran Support, when Eric Dahl calls they are always ready to do their best in respecting our Heroes. Uplifting  storys are told of many from near and far attending these emotional gatherings. Powerful days that also draw the membership of fellow Veteran motorcyclist groups, alongside the family’s of those at rest and other local concerned citizens. No matter what organization answers the call, every attendee listens to Erics daily mission plan, each learning the least invasive method of removing lichens and discolouration, each person dedicating themselves grave by grave scrubbing and weeding, raking and grooming the oft neglected heroes resting places thanks to the expertise shared willingly. Mother nature has had her effect on stone gravel and earth, heartfelt volunteers literally place their hands and hearts to the memorials , the lessons learnt now able to be passed on to all who care. Crucially, at days end each tribute of time and respect secures the final resting place of those now ‘Never Forgotten’.

This to me is the greatest part of witnessing Eric Dahls passion. He refuses to forget our worlds Heroes and the debt we owe each and every one of them. His leadership is providing not only the spark that is capable of reaching the grave of every Heroe, but the skills he is willing to teach to anyone pay perfect tribute to all our heroes world wide. Here at the Veterans Channel we are humbled to recognize the volunteers who answer the Memory Keepers challenge as each have proven they are as dedicated to Never Forgetting our Heroes, as is this true Guardian of the Fallen, Mr Eric Dahl of Drumheller Alberta.

The heartfelt poem ‘For the Fallen’ and its haunting words remind us of every loss suffered as generations continue to ‘give up their todays for the tomorrows of others’. The words of the 4th stanza we repeat in sacred Remembrance till this day. Words written as the First World Wars horror began, by Lawrence Binyon who was writing literally within sight of the future battlefield and final resting place of the HMCS Regina sunk in 1944 with Erics grandfather aboard.

“They shall grow not old, as we that are left grow old;
Age shall not weary them, nor the years condemn.
At the going down of the sun and in the morning
We will remember them.”