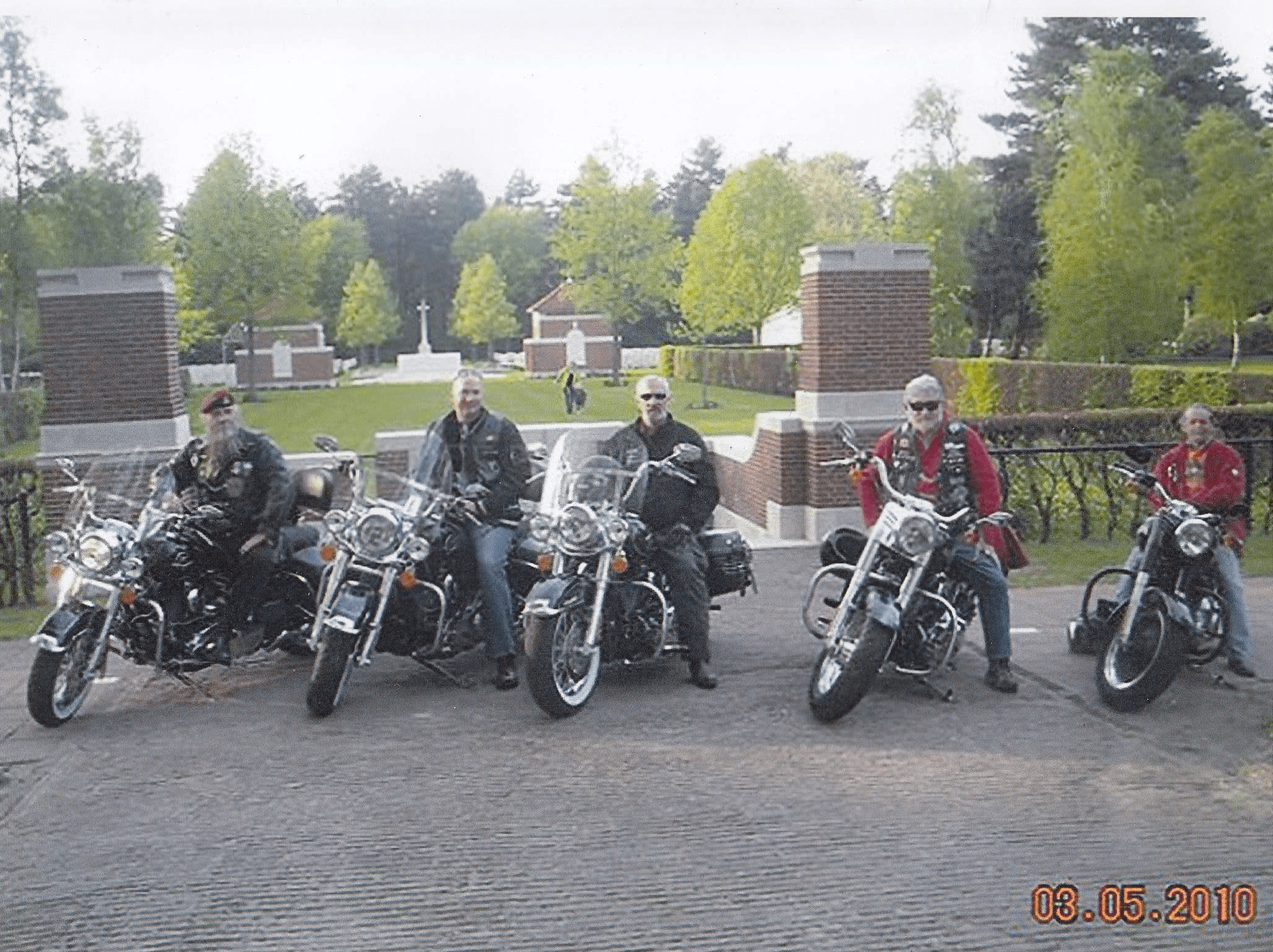 This spring is the 75th anniversary of the end of the European war with the surrender of Germany on VE Day ‘Victory in Europe Day’ May 5th, 1945. Due to COVID 19 restrictions a few very subdued ceremonies mark this incredible moment in time, here at the Veterans Channel we pay our respects with our programming, while in years past mass commemorations took place across Canada and in the Netherlands like the 2010/ 65th anniversary I witnessed alongside many of the veterans of the First Canadian Army who secured that victory at a terrible cost.

With these words during the 2010 65th anniversary of the liberation of Holland Albert James Walsh, a veteran of every action the armored force of the British Columbia Regiment fought in from Normandy to Holland and war’s end, reached into his pocket and carefully placed a handful of clay from home into the soil. Albert lost two brothers In WW2, Richard and Lance Sergeant Joseph Walsh 28, who was killed on D Day June 6th ’44.

It was my honour to act with others on this historic event as escorts for 9 surviving 2nd World War Dutch liberator veterans, as we filmed their triumphant return to the people they freed from years of brutal Nazi occupation beginning in May of 1940 until liberation spring of ’45. The young soldiers, now old men who left Canada to face combat to free the world from tyranny found indescribable conditions in Europe and the Netherlands in particular following the long years under the heel of the Nazi oppressors, ending with the ‘hunger winter’ of 1944 and freedom hard-won by those from a world away. This proud escort duty granted to us thanks to ‘Friends of Veterans’ organizer Randy Young of London Ontario who alongside Veteran Harry Watts raised funds nonstop prior to 2010 in an attempt to get 20 survivors back to Holland. Tragically with these heroes passing on steadily until the 65th anniversary arrived, only 9 stood ready physically as the flight approached. Additionally, in the last hours before liftoff, a shortfall of funds almost canceled everything, until a last-minute trip saving donation of $17,000 from the Canadian Tire Corporation assured the project’s success capturing the historic story of these Heroes returning.

From our arrival in Amsterdam with incredible hosts in Nijkerk, we toured steadily nationwide our journey eventually taking us to Apeldoorn with ‘our veterans’ as we retraced their steps gathering the memories on film at each emotional stop. Over 2000 Canadian students accompanied our visits, 13 ceremonies took place nationwide including parades and commemorations including the May 4th ‘Remembrance of the Dead’ ceremony’s ‘Silent March’ followed by the next day’s May 5th annual Liberation Day commemoration. It was our visits to Groesbeek and Bergen op Zoom Canadian War Cemeteries that stopped time for us all. It is incredibly humbling to stand among the graves of thousands of fellow citizens, the majority as young as the students whose mission was to study each fallen soldier. I can assure one and all that no one who witnesses the cost of freedom paid by those resting in foreign fields, will ever forget the true cost of freedom.

Groesbeek Canadian War Cemetery is a still-operating ‘open’ war cemetery as remains are being discovered and buried to this very day, In halting English for the benefit of myself and film director Lloyd Walton, Yvon Pare of Saint Marie Beauce Quebec, told us of his war, and of his two brothers, as we stood in front of Lt Daniel Pare of Le Regiment de la Chaudiere’s war grave. With silent tears at the solemn stone marker of grave I. D. 10. we learned Daniel was 24 years old when he fell January 16th, 1945 during the horrid winter advance to the Reichwald Forest. Yvon survived the war returning home to become Ste Marie Quebec’s first Chief of Police, supporting veterans and the elderly his entire life. As he stood that day in the Netherlands weeping at our sides atop his brothers remains, he hesitated as the memories came flooding back and he related how his older brother, 27 year old WO Class 2 Viatuer Bruno Pare, was killed 2 months after younger brother Daniel and only a month before the wars last day. He fell in the fighting at Zutphen, now resting in grave III. B.2. in Holten Canadian War cemetery, he was killed when the Chaudiere Regiment faced fanatical Hitler Youth with flamethrowers in taking a critical Anti-tank ditch and a destroyed bridge securing a key bridgehead.

Yvon hesitated as we learned of a family’s awful price paid for the freedom of absolute strangers a world away from Quebec. He finally found the words he was seeking, ‘The last time I was this close to my brother was on the day he was killed’. Sobbing, each of us felt the gravity of the loss of over 7600 such Canadian Heroes, now resting for eternity in Holland.

In the city of Amersfoort, we rented Harley Davidson’s for interviews we then held across Holland, from Arnhem and Nijmegen in the north to Bergen- Op-Zoom Canadian War cemetery in the south hearing gripping stories of unbelievable courage by children, tales of traitors and underground fighters, and the near discovery of a Jewish family hidden in a windmill being discovered by a German soldier who then, rather than call his officer on discovering evidence of the hidden refugee’s he whispered that ‘You must be more careful’ before leaving. We also learned of horrors witnessed that will stay with two generations till the day they die, those who survived will never forget the starvation winter of ’44 and its trauma when their entire civilization faced mass starvation. Many tragedies will be remembered forever by the survivors and passed on to every future generation as are the feelings of joy liberation provided, a collective memory seared into each citizen’s heart.

In Apeldoorn, a memory never to be forgotten was the honour of riding in WW2 restored vehicles during a 50 km reenactment commemoration parade in front of hundreds of thousands of waving onlookers all shouting their eternal thanks, often the crowds surging in to grasp the veterans’ hands. Many times our truck was stopped and during each pause, women held babies up to be touched by an aged liberator hand. Hearts pumped hard and arms grew weary as we did our best to recognize the humbling moment. Dave Sopha a fellow escort gave me a 1 pound bag of Canadian maple candies, and for a block, as hundreds rushed us with hands held high and open I merrily handed out maple leaf-wrapped sweets to children who surrounded us. I soon got that ‘sick feeling’ in my gut when it hit me that I had to start ‘rationing’ the ever lighter candy bag. As I began to ‘skip’ some kids I saw the looks of those missed, and in a flash, it hit me that I was feeling a mere fraction of the same sick feeling the veterans around us had felt in 1944.

That day participating in the May 9th National Liberation Parade each Nations veterans and escorts were seated in dozens of surviving second world war transport trucks, jeeps and reconditioned lorrys lined up for blocks as tanks, Bren gun carriers and motorcycles of every allied and enemy description zipped among throngs of thousands of onlookers. At one point our hosts the Dutch military restoration enthusiasts ‘Keep’em Rolling’ group who provided the historic vehicles were lined up ready to move when I watched an oncoming 1943 Ariel WNG motorcycle that had landed on D Day in 1944 with a Canadian Typhoon squadron, roaring along the waiting column with its rider shouting up to the passengers at each vehicle in turn. As the bike blasted to our side the rider yelled up “Is there a ‘Trapper Cane’ aboard?”, “Harry Watts from Canada sends his best and asks ‘Are you ready to ride?’ “, the steadfast Jeremy Van Dyke a lifelong family friend of Harry’s had hunted down and purchased this war survivor motorcycle that was left behind after war’s end, a trusty ‘steed’ that I then had the great pleasure to ride along part of the liberation route.

Here at the Veterans Channel, we are dedicated to telling the stories of our world’s heroes, in our own words. Follow along as we tell the stories of every generation that offer’s up their lives for those they may never know. Each of the liberators it was my honour to share time with in Holland during the 2010 65th Anniversary has passed on now. I will never forget my brothers Harry Watts, Jan de Vries, Bob Fenske, or John Flemer. Each of them alongside many others whose life example taught me and thousands of what true heroism is. All we have left of them are memories and the eternal respect of the Dutch people, and the stories they left behind that you will find on our ‘Trappers Patrol, Riding with Heroes’ and stellar Veterans Channel programming. Yvon Pare passed on December 24, 2010, with Albert Walsh who had three tanks destroyed by enemy fire under him during the war, his peacetime life serving the Legion and for many years speaking to school children of service and sacrifice, passing soon afterward. Both heroes I pray, now reunited with their brothers from so long ago, sharing stories together again!. We Will NEVER Forget !!