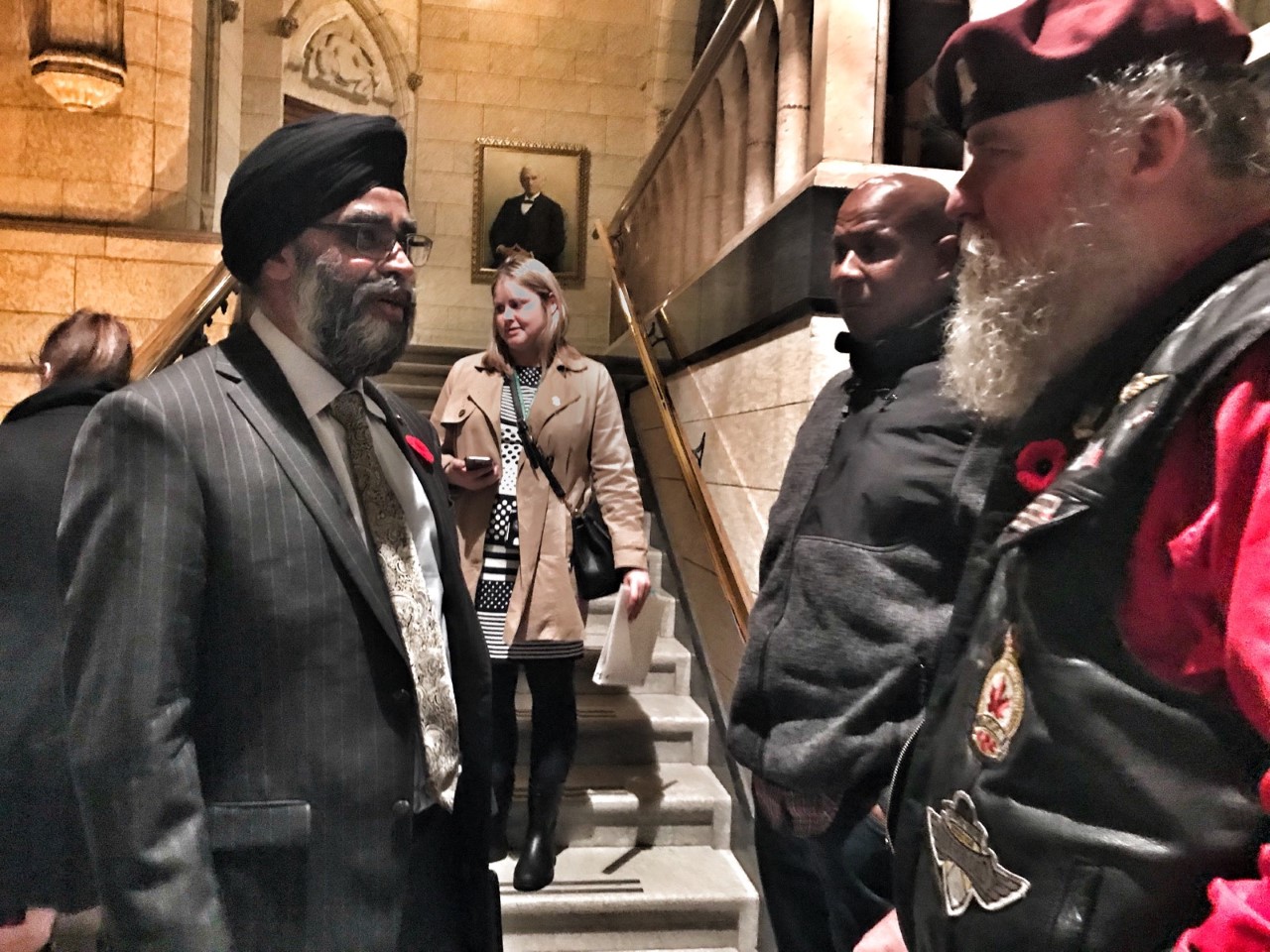 “As Host of the Veterans Channel programming ‘Riding with Heroes’ it is my honour always to stand with and gather the stories of service and sacrifice of those who have gone ‘above and beyond the Call of Duty’ while giving of themselves for others.

While filming in Ottawa October 31- November 1, 2018, it was my pleasure to spend days filming future episodes with Sergeant Major Adrian B. Hamrick (ret) a veteran of the oldest active duty regiment in the US Army, the historic ‘3rd US Infantry Regiment, ‘The Old Guard’.  A native of North Charlotte, North Carolina he followed in the footsteps of his father, a veteran of the Korean War as an Infantryman including service in four war zones, from Private ‘E1 to Sgt Major E9’ ranks where he aquired Expert Infantryman, Jump Master, Ranger, Scuba, Air Assault and Jungle Warfare certifications. His service took him worldwide while serving as a Platoon Sergeant in the 82nd Airborne Division, as First Sergeant and Command Sgt Major at Camp As Salyah Qatar, as a Senior Military Science Instructor at West Virginia State University, he was also the Operations Sergeant Major in Panama during that deployment, while his dutys as a Drill Sergeant and Relief Commander at the Tomb of the Unknown Soldier and historically as a Tomb Guard, badge #367, solemnly standing watch in Arlington National Cemetery over the ’Unknowns of WW1,WW2 and Korea’ at Arlington National Cemetery or holding the highest security clearances including Escort dutys to the President of the United States, All key moments in his life.

Since his retirement, Adrian a father and community leader has volunteered for countless energies as a Sports Coach, a teacher and mentor to many including an activism role for the disadvantaged.  In Washington DC he testified alongside Major General Allen Tackett addressing the Homeless Veteran crisis in Washington DC. His guidance and wisdom in supporting our energies at The Veterans Channel are as stellar as every challenge this warrior tackles. His no nonsense, cut to the chase attitude guarantees success for not only our Veterans Channel Leadership and staff but anyone meeting this soldier citizen are awed by his quiet strength and deep passion for others.

He was assisting us in filming our upcoming episode ‘The Tomb Guards’ for ‘Riding with Heroes’ relating his experiences as an American Allied veteran and comparing them to our Canadian tribute to all who have fallen with no known grave and represented by remains returned from a foreign battlefield.  These ‘Unknown Soldiers’ revered around the world, are placed at home to mourn those who never returned or where never recovered; giving familes a place to grieve.

Filming our episode’s in Ottawa, that week we’d spent hours in our National War Museum learning of ‘The Response’ our National War monument and its development and construction. The artist Vernon Marchs maquette sculpture of the iconic monument now rests in the War Museum’s Halls of Remembrance. We filmed next at the Tomb of Canada’s Unknown Soldier who rests at the foot of our War Memorial, then capturing the Changing of the Guard ceremonies as rain cancelled outside filming, we moved into the Halls of Parliament and filmed MP David Sweet’s emotional testimony of the bursts of gunfire just metres away from those trapped inside Parliament, awed by his ‘first person’ experience as the terrorist who’d just killed Cpl Nathan Cirillo at the War Monument was himself gunned down.

Afterwards we were shown the Peace Towers Books of Remembrance, then moved to the media area in front of the House, where it was my honour to introduce Sgt Major Hamrick to an old soldier, who is now our Minister of National Defence. The Honourable Harjit Singh Sajjan, Canada’s first Sikh Minister of National Defense who is also the first Sikh Canadian to Command a Canadian Army Reserve Regiment. His service began as a Trooper with the British Columbia Regiment the ‘Duke of Connaughts Own’ where he was commissioned and rose to the rank of Lieutenant-Colonel, deployed 4 times including a tour in Bosnia and Herzegovina where he was wounded, and tours in Afghanistan.

This photo was taken at the entrance to the House of Commons, the ‘House of the People’ short hours before the doors of the Center Block of our Canadian Parliament buildings where sealed for a decade to come as they restore the ancient halls for future generations. It was our great honour and pleasure to have access to Parliament that day to learn from MP David Sweet what terror felt like when it struck Parliament Hill, but also to witness the meeting of two great warriors.  As the Minister responsible for the management and direction of all matters relating to the National Defense of Canada shared time with us, to be in the presence of these two incredible warriors is a memory I’ll carry forever.  Follow The Veterans Channel programing as we tell the stories of our world’s Heroes! There are many more Heroes to identify, especially in my role as Host for ‘Riding with Heroes’ on The Veterans Channel!”–